I have now emerged from my writer-cave with 109 pages of a new screenplay.

Last you heard from me, I had just written "Fade In:" on my new sci-fi action script, KILL SCREEN... and this draft was the wildest ride I have ever had on a script.

Now I'm the guy who comes to work prepared. I researched the hell out of this one. Wrote up character bios. Planned out every set piece. Sowed in the seeds of a Theme throughout. Fully outlined this thing top to bottom... maybe I even over-outlined. Exhibit A: 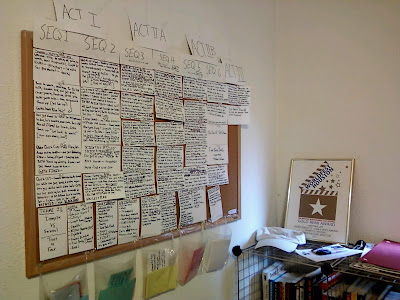 So I sat down, ready to write 3-5 pages a day like I always do... but nothing could have prepared me for this script:

Video games. Alien technology. Death traps. Guns. Robots. Explosions. An A.I. that would make  GLaDOS seem sane. All set to a ticking clock with 5 strangers stuck in an undisclosed location.

So when I sat down to write this one, it was like throwing pages at the ocean:


This was my process for all 109 pages. My page count rolled back and forth like the tide. It was frustrating, sanity-wracking, and ultimately rewarding. This is the best thing I've written. Hands down.

Perhaps this happened because I outlined too much -- my midpiont became my climax, scenes were cut, character arcs changed -- I restructured the whole script with my fingers on the keyboard.

Perhaps this process happened because I'm learning, growing, able to see the flaws in my work with fresh eyes even while I'm writing, coming up with rewrites as I hit page 10, 20, 30, etc.

Whatever it may be, I'm excited for the future:

I HAVE A JOB! Woohoo! After 13 months of unemployment, I now have a paying job as a Hollywood assistant working for two VPs of one of the biggest companies in Hollywood.

And I'm already writing "Fade In:" on my next script, a spy thriller called:

Working in Hollywood by day.
Writing scripts by night.
The emerging screenwriter's dream.

Nathan Ruegger
is an emerging screenwriter of popcorn thrillers. His short film Another Life won the Gold for Best Original Dramatic Short at the Houston Film Festival and Official Selection at 12 Film Festivals. Nathan recently graduated from USC's School of Cinematic Arts with an MFA in Film Production and two screenplays, which lead to winning Second Round at the Austin Screenwriting Competition, Quarter-Finalist at the Big Bear Lake Screenwriting Competition, Finalist at the Page Int'l Screenwriting Awards, and a feature writing assignment for an established producer. Today, Nathan is writing an ultra-low-budget thriller for his feature debut -- and you can see more on his official website.